Considered to be the Instagrammer's flower of choice – the hashtag #peonies has been used nearly 2.8 million times on the app – peonies are luscious, luxurious and larger than life.

They're also a limited edition flower, growing and blooming in a very short space of time each year, which makes them all the more special.

We love how peonies can go from tight, spherical shaped buds to lush, fluffy flowers that don't need support from any other blooms to look good in a bouquet. They're the Cinderella of the flower world going from drab to fab but they don't lose their fanciness at midnight.

Want to know more about these stunning flowers and what they mean when featured in a bouquet? We've rounded up everything you need to know in our guide. 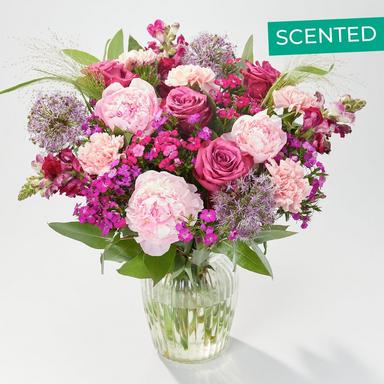 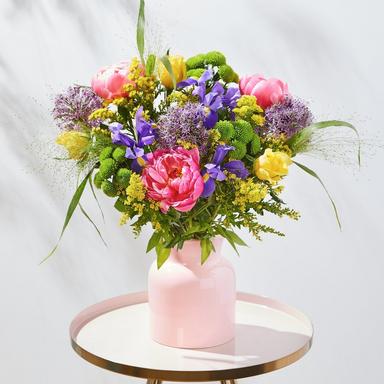 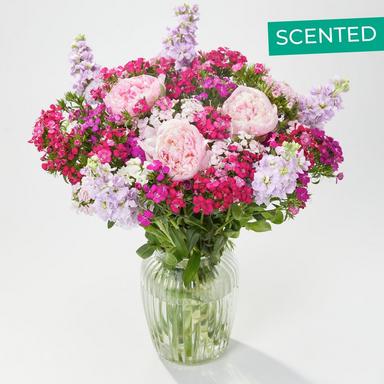 1. Peonies are native to China

But these days they're grown around the world as they're in such high demand come late spring. The UK, Holland and France now produce peonies that can be enjoyed in those stunning seasonal bouquets.

2. Peony flowers open up to three times their original size

Peonies will arrive in a bouquet in tight, golf ball sized buds but these quickly unfurl to reveal the gorge puffy blooms you know and love. Each petal loosens up so the flower can open up in all its glory.

3. Peony plants can live for more than 100 years

We wish it were the same for the flowers! But this means if you're the green-fingered type you can plant one of these beauties and enjoy it for the rest of your life in your garden. Unlimited peonies? What's not to love?!

These gorgeous blooms have been flourishing for 4,000 years – that's a pretty long reign of power in the flower world.

5. Peonies are the flower for 12 year wedding anniversaries

Did you say 'I do' between April and June? Then a big old bunch of peonies is the choice of blooms to let your partner know you feel the same way about them as you did on that special day.

6. The Chinese for peony is sho yu which means 'most beautiful'

We couldn't agree more! We think they're one of the most beautiful blooms around whether they're stealing the show in a bouquet or featured in a flower wall.

7. Peonies were once believed to have medicinal uses

While we don't fancy swapping our paracetamol for a peony flower, the roots of these blooms were once believed to cure snake bites and even epilepsy. They're still used today in some Chinese remedies to lower pain and improve blood flow.

8. There is a city dedicated to peonies in China

Luoyang, also known as the City of Peony, the hype is real when it comes to peonies. Here you'll find a garden where over 100 varieties of this flower bloom. There's also a festival held each year to celebrate the peony's beauty where you'll enjoy folk performances and see these stunning flowers on display in all their glory.

9. Ants love peonies in the garden

While you may not like the thought of creepy crawlies on your flowers, we think the idea of ants crawling inside the peony petals to get at their nectar and getting cosy inside the bloom is super cute. Plus, the ants won't do the plant any harm.

10. Peonies come with some superstitions

It's believed that if you have a peony plant in your garden and it's full of flowers this means you'll enjoy good luck. If the flowers look a little lacklustre, however, this means you should be prepared for some misfortune.

Peonies have many meanings depending on their colour. Overall, the flower is considered to symbolise bashfulness or good luck, while in China and Japan the blooms mean wealth, honour and fortune.

Peony flowers are also said to represent compassion, making them a strong choice for many looking for sympathy bouquets.

Lots of flowers have roots in Greek mythology and the tales of gods and goddesses. Pretty cool, right? Well, peonies are no different.

The flower is now believed to symbolise bashfulness due to its part in the tale of the nymph Paeonia. Her beauty attracted the attention of the god Apollo but this upset the goddess of love Aphrodite – who was a bit of a jealous type.

Paeonia noticed that Aphrodite was watching her being flirted with and became bashful and turned red. This just annoyed Aphrodite more and so the goddess decided to turn Paeonia into a peony flower as punishment.

Another tale links the peony to a student called Paeon who used the flower's root to heal the god Pluto but again, a god got jealous of his talents. It seems lots of Greek gods and goddesses had a touch of the green-eyed monster in them.

Aesculapius (try saying that three times fast) was the god of medicine and tried to kill Paeon for being smarter than him. Pluto, however, took pity and turned Paeon into a peony flower to protect him. This tale is, of course, where peonies get their meaning of compassion from – although we're not sure if being turned into a flower is much of a rescue.

Peonies in ivory shades are said to symbolise bashfulness with many people opting for these blooms when they want to say sorry and ask for forgiveness.

If you're looking for a good luck charm, pink peonies are the way to go. These candyfloss hued blooms are said to symbolise good luck and prosperity.

While most of us prefer the ice cream inspired shades of peony, you can find these flowers in lush red hues. Red peonies are said to represent love (of course), passion and respect. Give these to your partner as an alternative to roses.

WHEN DO PEONIES BLOOM?

You can enjoy peonies between late April and mid-June. That's right, it's a pretty slim window but we think that makes these stunning flowers extra special. Mark it on your calendar and look out for these gorgeous blooms at this time of year.

Missed out this year? Not to worry, there's some fabulous flowers similar to peonies so you can still get your fix.

HOW TO GET PEONIES TO BLOOM FASTER

On a tight deadline and need your peonies to open up quicker than usual? Then pop them in a warm, bright room. Peonies love to bask in the sun (who doesn't?) and soon their petals will unfurl to reveal the gorgeous flower in its final form. You can also pop them in warm water and they'll open up even faster! But bear in mind that the faster they open up, the shorter their vase life. If you want to slow the flowers down, pop them in the fridge – the coolness of the fridge will stop them from opening up as quickly.

With such a short window for enjoying these blooms, you'll want to do all you can to enjoy them just that little bit longer. Here are our care tips for peonies:

If you are looking to keep your peonies even longer, they are a great flower to dry. From air drying to to silica gel, we've created a handy guide on how to dry peony flowers.

WHEN TO SEND PEONIES

We think these flowers are perfect for any occasion but here are just a few specific ones to consider:

An anniversary – Whether you're celebrating your 12th wedding anniversary or just your time together as a couple, a bouquet of peonies are the perfect alternative to your usual rose.

If you need to apologise – Whoops, you've upset someone and now you need to make it right. Peonies are said to mean bashfulness, so we reckon they're the ideal flower to send to someone you're seeking forgiveness from.

To cheer someone up - Whether they're not feeling great or just need perking up, a bunch of puffed up peonies will brighten their day.

To celebrate a new home – If someone close to you has moved into a new home give them a bunch of peonies to wish them luck in their new place. Plus, these flowers will instantly brighten up the space, ideal if there's lots of decorating to do!

To wish someone luck – As we know, these blooms are considered to mean good luck in China so present a loved one with a bunch of peonies (featuring an even amount of flowers) if they're going for a test or a promotion at work.

Peonies aren't just pretty faces. There are several ways you can enjoy these stunning blooms:

Ready for peony season already? We certainly are! Don't forget our tips and tricks to help you enjoy your bouquet of peonies for as long as possible and wow your friends with your new found peony knowledge!